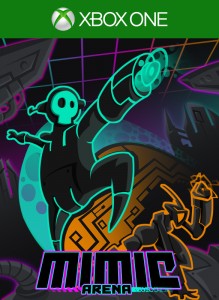 Mimic Arena is a local couch multiplayer platform shooter that focuses on high energy and quick reflexes. Up to four buddies are pitted against one another, but only those who have mastered the arts of jump and shoot dare hope to stand a chance, thankfully you will have some backup. Everything the player does, wherever they go, and wherever they fire; is recorded and then played back again as a Mimic. These clones will be an integrate part of any players arsenal. Providing distractions and supporting fire for new players and enabling more advanced strategy such as zoning and coordinated attacks for veterans.

Throughout the battle players and Mimics alike will be able to equip themselves with an assortment of weapons such as the reflective disk that travels like a boomerang and reflects projectiles or the Phase Beam that instantly pierces through terrain and all attempting to use it as cover. With the right weapon and these clones can prove to be a dependable ally or a troublesome enemy. Control your shots for precision and efficiency or let them fly wild and embrace the bullet storm that is bound to ensue, just be sure to watch your back.

Fight alongside your past selves in this techno bullet hell arena. You must master the arts of jump, shoot, and repeat if you wish to stand a chance. Jump off walls to avoid the onslaught of bullets heading your way. Shoot an assortment of weapons that blanket the battlefield in brightly colored destruction. Execute advanced flanking maneuvers with your former self to gain the upper hand.